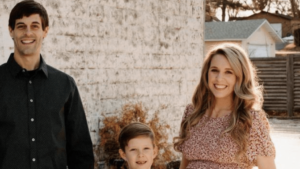 This month, Derick Dillard and Jill Duggar welcomed their third child. In addition to making them a family of five, …

As we reported yesterday, Jill Duggar has welcomed her third child, a son named Frederick. Freddy entered the world on …

Oh, what a happy day for this controversial family! Jill Duggar and her husband Derick Dillard have welcomed their third baby boy. The couple made the announcement via their website on Monday, sharing: “‘Freddy’ Frederick Michael Dillard is here! He was born 7/7/2022 at 5:16pm weighing 7lbs. 6oz. and is 20 inches long.” So exciting!! […]

In recent weeks, present and former Duggar fans have been looking upon once-overlooked moments in the family history in a new light.

From seeing the way that the Duggar daughters’ upbringing impacted them for life to foreboding scenes with the Duggar parents, there’s a lot to digest.

One of the latest points of interest is an old clip of Jill Duggar with her husband, Derick Dillard.

Fans find Derick’s rant off-putting, and think that Jill was weirded out … but what they’re seeing may just be the result of a lifetime of conditioning.

In this throwback clip, which is under discussion by social media users, Jill and Derick were at a restaurant.

For whatever reason, Derick decided to wax philosophical about what it means to be married.

“Marriage is like lifelong learning,” he announced, comparing the relationship to scholastic pursuits.

“So right now I have my high school diploma in Jill Dillard,” he characterized.

“But I want to study you more,” Derick continued, “and get my Bachelor’s and Master’s.”

“Eventually I’d like a PhD in Jill Dillard,” Derick went on.

“So,” he continued, “I can think what you’re thinking before you even think it.”

That’s a goofy analogy, and the last line could be a little off-putting even if it was well-intentioned.

What really struck people who are revisiting the clip is Jill’s demeanor during it.

Jill seems to smile awkwardly while Derick is speaking.

Some fans think that she may have been as uncomfortable listening to her husband speak as they were.

Discussions took place in Reddit comments as people mused over Jill’s thoughts at the time.

One wrote: “I can just hear Jill internal dialogue, ‘Okay smile and pretend he’s being sweet and amusing even though he’s making zero sense.'”

“I’m not sure I want my husband to think what I’m thinking before I think it,” another commented. “Seems like that could be a major problem.”

It is certainly possible that Jill, despite not having any work experience due to the cult’s beliefs, was doing the wifely version of a “customer service face.”

Countless cashiers and waiters have had to stand and smile and listen while customers spout absolute nonsense at them.

We don’t mean toxic customers yelling — well, not only that. Sometimes a person will stop by a deli counter and spend 20 minutes talking about being guided by angels.

As we said, Jill has not had those exact experiences.

From birth, she was groomed to be a wife and a mother and a Christian, nothing more.

But hearing someone ramble nonsense in your face may be a universal experience. Even — perhaps especially — for cultists.

One cannot help but wonder if the apparent discomfort that viewers are perceiving is due to projection, however.

Jill’s expression could be explained by the cult’s teachings, demanding that women radiantly smile at and adore their husbands in visible ways at all times.

Instead of simply listening to Derick, Jill may have felt that she had to overact herself paying rapt attention to his every word. She may have missed the mark a little, though.

Very recently, Derick Dillard and Jill Duggar sold their home, leaving behind the house that they bought in 2019.

Though the timing aligns closely with Josh’s sentencing hearing, the reason for the move more mundane — it’s for Derick’s new job.

Now, Derick has been sworn in as an attorney, and the Dillards have their new home.

Jill is showing off the upgrades that they have made to their new house.

“I was sworn in as a licensed attorney in the state of Arkansas,” he announced.

Derick gave a special shout-out to “my lovely bride, @jillmdillard who has been there for me through it all. I am eternally grateful.”

This week, Jill gave her fans and followers a virtual tour of their home, including some upgrades.

Obviously, it was part of some sort of deal that likely got her a discount for the work done on the home.

While some of these before-and-after photos look like a sad, monochromatic downgrade to our eyes, presumably it was what Jill and Derick wanted.

“We are so excited to show y’all a sneak peek of our new house!!” Jill wrote.

“We knew we wanted to make a few changes to the new place to update it + add some personal touches,” she explained.

“So,” Jill continued, “we scouted around and found someone to help us!”

It is of course a relief to hear that a pregnant Jill was not repainting or replacing cabinets in a new house or breathing in paint fumes.

Instead, they found a company “to turn our kitchen (+ a couple bedrooms) into a dream!!”

Of course, Jill gave the company and its employees rave reviews after they helped move a fridge, matched paint colors to trim, and painted an extra wall.

It is a little heartbreaking to see the vibrantly painted walls — one a breathtaking cobalt, another a bold aubergine — turned the private residence equivalent of “landlord white.”

Similarly, the countertops look newer but not necessarily better. A fine installation, but a less bold choice and with less character than the cabinetry that it replaced.

But, as we said, this must have been what Jill and Derick wanted. It’s their house, after all.

As for more details, the new family home is 2,450 square feet and located in Siloam Springs, Arkansas.

The house has four bedrooms and three bathrooms, which is pretty much exactly what you want if you’re about to welcome a third child.

Despite its decent size, they purchased the home for $385,000 — a testament to how varied the real estate market can be by location.

Technically, that is located on the Arkansas-Oklahoma state line, but his commute will “only” be about 40 minutes — shaving off a cool half hour from his current distance.

Meanwhile, they will still be 45 minutes away from Jim Bob and Michelle, unfortunately.

Earlier this year, Jill Duggar and Derick Dillard revealed that they are selling their home.

While they’re sorry to see the property go, they know that they need to uproot for Derick’s ne wjob.

Besides, their family is growing. Jill’s due date is only a couple of months away.

Now, the Dillards have successfully sold their home.

Derick and Jill purchased the four-bedroom, two-bathroom, 1,486 square foot house more than three years ago, in April of 2019.

The house in Lowell, Arkansas is on a sizable 8,276 square foot plot of land.

While the house is arguably large enough for the soon-to-be family of five, Derick’s new job required a move.

In Touch Weekly reports that the sale went through on May 12.

While today’s housing market has skyrocketing prices spurred on by corporations buying up neighborhoods, not all markets are the same.

We have all seen the fenced backyard over the past few years — great for entertaining, privacy, or having pets or children.

The Dillards listed the specific plants in their backyard when advertising their home, indicating no plans to take these plants with them.

Soon, they will both have a baby brother.

A four-bedroom house is generally enough for a family that size (if you don’t need a guest room), but there’s a chance that the move could lead to an upgrade.

Jill and Derick will likely show off their new home in the not-so-distant future.

They likely had to weigh many different considerations before deciding where to live, including the size of their growing family.

Derick’s new job may have dictated where they move. Other factors, like finances, could determine other specifics.

Jill’s recent legal battle revealed that she makes only about $10k per year in sponsorships and endorsement deals.

That’s a nice and relatively easy bit of extra money to have lying around, but it’s not enough to qualify as a full-time job (or full-time influencer)

Right now, most families need to have both partners working. Depending upon Derick’s new salary, they might need to make difficult choices.

The truth is that Jill, who spent many years as a reality star before she and Derick left Counting On, should have more of a cushion than she probably does.

Even child reality stars (which, not to get on my soapbox, should not be a legal thing) usually benefit from their years of on-screen work.

The Gosselin sextuplets recently turned 18, attaining the first payout on their reality TV earnings. But that’s not how things work for the Duggars.

As Derick has long complained, Jim Bob pocketed the money from the reality series himself, selling the idea to his family as a form of religious “service.”

One can easily imagine how a manipulative patriarch could spin a reality career into a sort of “missionary” work to his cult-raised offspring.

While Jim Bob does give his adult children expensive gifts sometimes (in order to keep them under his control), the right thing to do would have just been paying everyone directly for their work.

Jill and Derick are doing okay, but it’s hard to think about any of this — home shopping, how much Jill makes through Instagram endorsements, etc — without remembering how she was robbed.

Worse still, of course, is that she was denied a real education or the chance to have normal life experiences during her cult upbringing.

Jill will never get another childhood, and can only play the hand that her toxic parents dealt her. It’s a shame.

Back in 2017, Jill Duggar and her sisters filed a lawsuit for invasion of privacy.

Now, in an ironic twist, the private information of these siblings continues to surface online as a result of this legal maneuver.

The truth may finally be coming out about Jim Bob Duggar.

In February, a judge dismissed a lawsuit filed Jill, Jessa, Jinger, and Joy-Anna Duggar against the police department of Springdale, Arkansas… as the siblings claimed that authorities had …

It is no secret that Jill Duggar has had a troubled relationship with her parents over the years, but it turns out there was a lot more to the story about what caused the rift. As you may recall, a police report was released to the public in 2015 revealing that her father, Jim Bob […]

If you know anyone who’s bought or sold a house in the past couple of years, then we probably don’t need to tell you that these are strange times in the American real estate market.

There’s another reality-star-turned lawyer in the house, and this one actually went to school for it!

Jill Duggar and Derick Dillard are getting set to welcome another baby to their family.

But you already knew that.

The question for fans of this famous couple of late has been:

Jill Duggar is doing the best she can to keep her unborn child safe at the moment.

She just wishes she knew exactly what to do.

The former reality star tested positive for COVID-19 last week, announcing to the world on Instagram that both she and…

As previously announced, Jill Duggar and Derick Dillard are expecting their third child some time this summer.

It’s a very exciting time for the couple.