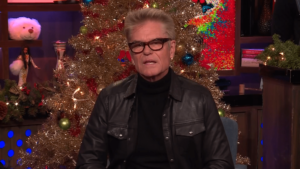 Early this month, Lisa Rinna announced her exit from The Real Housewives of Beverly Hills. Stunned? Sad? Excited? Some fans …

Did Harry Hamlin Just Leak the REAL Reason for Lisa Rinna’s RHOBH Exit? was originally published on The Hollywood Gossip .

Lisa Rinna’s husband just revealed why she left the Real Housewives of Beverly Hills… While in attendance of the Sundance Film Festival in Park City, Utah, Harry Hamlin was overheard speaking on his wife’s departure from the Bravo reality series after eight seasons. Apparently, it had to do with co-star Sutton Stracke… According to Page Six […]

Delilah Belle Hamlin is opening up about sobriety following her major health scare last year. The daughter of Lisa Rinna and Harry Hamlin has been practicing a clean and healthy lifestyle in 2022, referring to her newfound sobriety as “something I’m really grateful for.” In a Thursday interview with Flaunt Magazine, the 24-year-old reflected on […]

Lisa Rinna isn’t bothered by what Kathy Hilton thinks of her… As you know, there’s been some drama going on between the Real Housewives of Beverly Hills stars — and it seems like it’s far from over! On an episode of the ever-popular Bravo show from last month, Lisa revealed what her co-star allegedly said […]

The post Lisa Rinna Reacts To Kathy Hilton Calling Her The ‘Biggest Bully In Hollywood’ appeared first on Perez Hilton.

Lisa Rinna kept her wedding anniversary celebration sweet and simple — but it still made us swoon! The 59-year-old Real Housewives of Beverly Hills star is in a nostalgic mood on this Throwback Thursday. And for good reason, too, because she’s reminiscing about saying “I do” 25 years ago to husband Harry Hamlin! Related: Erika Jayne Admits […]

It is about to be a whole lot less holly jolly over at the Hamlin household! Delilah Hamlin recently puzzled some fans after posting a since-deleted video on TikTok that seemingly called out her parents, Lisa Rinna and Harry Hamlin, over past “trauma.” Without going into detail, Us Weekly reports that the 23-year-old model wrote […]

After less than a year of dating, Amelia Hamlin dumped Scott Disick after his bitter antics humiliated himself and her.

When you’re boning a father of three who’s about twice your age, you don’t expect to be the mature one in the relationship.

Now it’s over, but Amelia has her own father — veteran actor Harry Hamlin.

We’ve all heard what Lisa Rinna had to say. What is Harry’s take on it?

During Harry Hamlin’s appearance on Watch What Happens Live this week, virtual fans posed a question.

“Harry, what do you think happened between Amelia and Scott Disick to cause the breakup?” a question began.

“And,” the question continued, “were you secretly happy when they did?”

Harry graciously complimented the question before his answer began.

Harry noted: “she’s living in New York, and she’s having the time of her life … solo.”

“I have no idea what exactly happened there,” he confessed.

Harry answered: “I’m just glad that she is solo, put it that way.”

In other words, Harry is glad that Amelia split.

Now, he and Lisa had a very nuanced view of their young adult daughter dating Scott.

As an adult, it was her choice to make. And Harry had been in a relationship with a much older woman when he was a young actor.

However, Harry is saying more than just that he’s happy that Amelia threw her geriatric ex to the curb.

He emphasized that Amelia is not formally with anyone right now, multiple times describing her as “solo.”

In other words? No rebound relationship, in public or in private.

Why would he be happy about this?

No one is saying that you can’t start hooking up after a breakup, but serial monogamy can take its toll on a person’s sense of self.

Amelia doesn’t need the validation of a relationship, in public or in private, to be her own person.

She is a hot model whose parents are both famous in their own rights.

The world is hers to take by storm.

In particular, this shows that Scott’s bad habits of getting photographed with hot young things after breakups didn’t rub off on her.

Pete Davidson’s busy at the moment, but Amelia could have grabbed any status symbol that she wanted and gotten photographed making out wherever she chose.

But that wouldn’t be a relationship — at least, not a healthy start to a lasting one — and it would show that she’s still fixated on Scott.

Scott is someone who is all too familiar with fixating on your ex.

After all, his genuinely pathetic digs at Kourtney Kardashian’s romance with Travis Barker were what landed him in hot water in the first place.

Why he couldn’t be mature enough at his big age to just be happy for the mother of his children?

Amelia, at least, is more mature despite being only twenty years old.

Breakups are hard for anyone, and when you’re younger, many people are still bogged down by hormone-fueled feelings that are much more intense than they will be in a few years.

But then, Scott is living proof that some people never grow out of that, and that middle school relationship drama can be a lifelong pursuit.

Speaking out! During their 11-month relationship, Amelia Hamlin and Scott Disick‘s fans were dying to know what her parents, Harry Hamlin and Lisa Rinna, really thought about the couple (especially because of the large age gap). At the time, the fam remained fairly tight-lipped — and mostly neutral — but not anymore! On Tuesday’s episode […]

Lisa Rinna‘s daughter is opening up about her recent health struggles and why, as she terms it, she’s been “MIA” on social media lately. Delilah Belle Hamlin posted an emotional 30-minute long video to her Instagram page on Tuesday. In it, the 23-year-old spoke directly to the camera about her health, and why she believes that […]

Amelia Hamlin is gonna wear what she wants to wear… but that doesn’t mean she’s not concerned about dear old Dad! On Sunday night, to celebrate the Perfect Magazine party for London Fashion Week, the 20-year-old model showcased an incredible new look with a sheer chainmail two-piece dress on top of… nothing! The braless shocker certainly got […]

Amelia Hamlin doesn’t know what to think after discovering her parents relaxing together while completely naked in their hot tub! The 20-year-old model took to her Instagram Stories on Saturday afternoon to voice her, umm, displeasure with having caught momma Lisa Rinna and pop Harry Hamlin forgoing their clothes for a naked romp in the warm water. Of course, […]

Amelia Hamlin is seeking out some support from the entertainment world — because she’s sure not getting it at home! On Thursday, Paper Magazine stepped up and defended the 20-year-old model amid major drama between her boyfriend Scott Disick and her mom, Lisa Rinna. But is this the kind of support Amelia really needs right now or […]

The post Amelia Hamlin Responds Publicly To Mom Lisa Rinna’s ‘Why The F**k Is It Scott Disick’ Comment, And… appeared first on Perez Hilton.

The post Lisa Rinna Frustratingly Asks ‘Why The F**k’ Is Daughter Amelia Dating Scott Disick — ‘Why Can’t It Be Harry Styles?’ appeared first on Perez Hilton.

It sure sounds like Lisa Rinna is really coming to terms with having Scott Disick in her life! While it was certainly unexpected when the Keeping Up with the Kardashians star got with Lisa’s then-19-year-old daughter Amelia Hamlin, the shock has apparently worn off! Now, the Real Housewives of Beverly Hills star is solely focused on making sure her daughter is […]

Does momma approve?! Well, the verdict is out and Lisa Rinna seems to be okay with Amelia Gray Hamlin’s relationship to Scott Disick — even with that massive age gap (18 years, to be exact)! The reality star opened up on Wednesday’s episode of Watch What Happens Live with Andy Cohen while promoting Real Housewives […]

Well, in case you were worried, fear not! Scott Disick and his latest teen girlfriend Amelia Hamlin are still going strong! The KUWTK star and the daughter of Real Housewives stars Lisa Rinna and Harry Hamlin were spotted together in Cabo San Lucas over New Years still looking very much like a couple. In photos that can be seen […]

The post Scott Disick Spent New Years With Amelia Hamlin In Cabo — After Apparently NOT Being Invited To Her Family Christmas! appeared first on Perez Hilton.